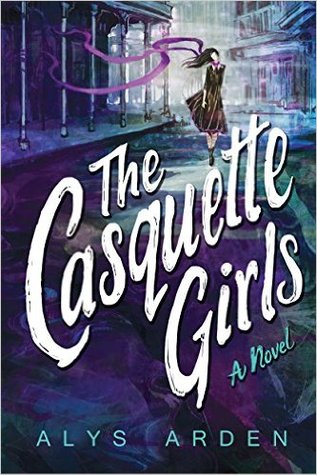 Seven girls tied by time.
Five powers that bind.
One curse to lock the horror away.
One attic to keep the monsters at bay.

After the storm of the century rips apart New Orleans, sixteen-year-old Adele Le Moyne wants nothing more than her now silent city to return to normal. But with home resembling a war zone, a parish-wide curfew, and mysterious new faces lurking in the abandoned French Quarter, normal needs a new definition.

As the city murder rate soars, Adele finds herself tangled in a web of magic that weaves back to her own ancestors. Caught in a hurricane of myths and monsters, who can she trust when everyone has a secret and keeping them can mean life or death? Unless . . . you’re immortal.

I don’t even know how to express my feelings about this book. While I was expecting to like it I didn’t knew that I would love it as much as I do. I haven’t been in a fantasy mood in the last few months and to be honest I don’t remember if I ever read a book with witches. Let’s just that now I want to read more books that feature witches.
The story starts when Adele and her dad are back to New Orleans. New Orleans was affected by “The Storm” two months before the start of the book leaving death and destruction all over the place. After their comeback strange things start to happen that are related to some myths about New Orleans that are told in the book (myths that are not real IRL) and to Adele’s ancentors. I loved everything about this book and now I want to visit New Orleans because of the way that Adele talked about how the town was before “The Storm”. The characters where amazing and I even loved to hate the bad guys. You know that a book is really good when you actually like the bad guys. Adele was an amazing main character but I also loved Isaac, Nicco, Desiree and all the other characters. Another thing I loved about this book was the romance mostly because it wasn’t the main focus of the book. Yes the romance was there but the author was able to assure that the romance wouldn’t steal the spotlight of all the other things happening. There was also a love triangle. You might know that I normally don’t like love triangles but you know that it’s a good one when you can’t even choose one of the guys. While many secrets have been revealed there are still a lot of things that we still don’t know and I’m really excited to read the second book and find out more things about what happened.
The only reason why I’m not giving 5 stars to this book is because in the beginning was a little bit too slow for me. I know that is a really important part of the book because we have the world building and all the background story but it really took me some time to read that first chapters.
Overall, this is an amazing book that has everything. I loved the mystery surrounding the whole thing, the characters, the romance, everything. And you can really tell that Alys Arden knows New Orleans French Quarter because of the way she described it. If you’re looking for a good urban fantasy series you should definitively try this one. I know that I can’t wait to read the second book of the series.