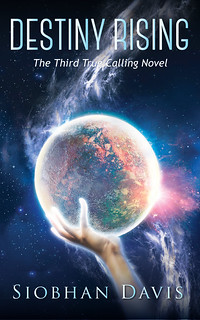 Blurb:
Every choice has a consequence.

Once again, the world is on the brink of momentous change. As revolutionary organization Saoirse prepares to battle the government for control of Earth and Novo, Ariana and those she loves must join humanity’s fight for justice and freedom.

Torn in one direction by her unique connection to childhood sweetheart Zane, and pulled in the other by a relentless passion for her fiery fiancé Cal, she must make the hardest decision of all. While embarking on a road to self-discovery, her psychic gift evolves and the full extent of her powerful ability is revealed.

Then fate lands another savage blow and she faces the most horrific choice of all. Forced into striking a deal with the enemy, she must make the ultimate personal sacrifice or risk everything she holds dear.

When destiny finally rears its head, what will the future hold?

This is the last book from the True Calling trilogy and after the way that Beyond Reach ended I needed to read this book. This book was full of action and drama. When something would be resolved something else would happen and sometimes I couldn’t even breath when some stuff would happen. Basically this book was a rollercoaster .I loved to see how everything ended but sometimes I would get mad to the characters because they’re just teenagers and teenagers sometimes make stupid decisions. One thing I absolutely loved was Ari’s development. We go from this girl who doesn’t know what to do to someone who makes really hard decisions without having problems with that. I understand the need to send her away so that she could develop her psychic abilities but that also let her grow up. Another thing I loved about the end of this series was the epilogue. I love epilogue and seeing what the characters are doing a few years after and I loved to see that. Something that I would like was that the book was focused a little bit more in the fight for freedom and not about the romance. It’s not that I didn’t like the romance but for me the final fight was just too fast and I like to have it a little bit more developed.
Overall, I really enjoyed this book. It was a great way to finish this trilogy. If you like sci-fi young-adult series you should give a try to this one.

We exit on the lower level and hurry to keep up with his brisk pace. Walking through a succession of winding corridors and endless passageways, we eventually stop in front of two large, vaulted steel doors. Dad taps in a code on the keypad and the doors retract.
We step into the vast Operational Command Center set over two levels. The outer glass window doubles up as a screen, and a barrage of information floats in front of my eyes: coordinates, maps, images, graphs, and other military data sweep across the wide screen in rotating grids. I count four rows of technicians seated at uniform square desks. Some have their heads bowed, eyes firmly fixed on digital screens. Others converse lowly between themselves or communicate via small digital earpieces. A steady thrumming sound resonates in the room, and the air of urgency is palpable.
A large rectangular table takes center stage on this level, and I spot several familiar faces seated or standing in close proximity. Separate digital pods line the back wall. Two enclosed rooms are off to the right.
A deadly hush descends over the room, and my heart spikes in anticipation. Swiveling around, I focus on the screen as an image loads. “What’s happening, Dad?”
Gently, he clasps my shoulders. As I sense his mounting fear, a cold sweat forms underneath my clothes. He presses his mouth to my ear. “The government is moving in on the Clementia Connecticut compound.”
My eyes widen as the image of the familiar woodland materializes on the screen in front of us. A solid block of Rangers stands shoulder to shoulder outside the main entry hatch, weapons raised and ready. A fleet of stealth-craft hovers ominously overhead.
My breath hitches in my throat as I stare trance-like at the screen. “Zane.” The word is a whisper on my tongue as my eyes latch onto Dad’s face. He grips my hand and we both stare, horror-struck as the stealth-craft simultaneously release a slew of missiles into the air.
Standing motionless, united in our fear, we watch as the underground facility explodes in a massive fireball that illuminates the entire night sky.

You can find Destiny Rising on Goodreads

Praise for Destiny Rising:
“It was beyond brilliant, totally unputdownable, wildly entertaining, edge of the seat action, full of suspense; it totally rocked. Loved the ending, loved the book.” Karla. Goodreads Reviewer.

“This is without a doubt the best book this author has written so far. I loved it from the start until the end. This series shows how a love triangle can be done right. Destiny Rising evoked so many emotions in me … and the ending, wow, so powerful. I highly recommend this series.” Lola’s Reviews.

“I cannot believe all of the whammy that this author packed into her book. It’s insane how quickly she’s put out these three books, and the quality is so incredibly good.” Danielle. Paraeducator and Goodreads Reviewer.

“The events in this book, especially the ones I thought I could handle, left my heart and mind racing. Siobhan Davis is an exceptional writer and she knows how to wrap a reader around her fingers.” Khayzelle. Written Arts Blog.

“Suspense, and the urge to turn the page were almost overwhelming, resulting in quite a few long nights. The story is complex, but solidly built. Good to the last page.” Patricia Hamill. Author Blogger. Puretextuality. @PatriciaHamill2

“I cannot put my love for Siobhan Davis’ True Calling series into words – it’s easily one of my favorite series. Destiny Rising tugs at your heart strings and messes with your feelings, but it is so wonderful. The writing is brilliant and flows wonderfully. Davis’ brings the series to a close with an epilogue that ties everything perfectly together. What a fantastic ride…”
Danielle. RamblingB00ks Blog.

“True Calling was great, and Beyond Reach was awesome, but Destiny Rising took the series to a whole new level. This series deserves to become as well-known as popular series such as The Maze Runner, The Hunger Games, Divergent, etc… It’s that good.”
Rose. Paranormal Books Blog.

First two books in the series:

Planet Novo, nestled in space twelve hundred miles above the surface of the Earth, is the new home of 17-year-old Cadet Ariana Skyee. Confused by the government-sanctioned memory erase and distressed at her impending forced marriage and motherhood, Ariana’s plans for the future are thrown into complete disarray.

As the traumatic events within her family life enfold, Ariana grows increasingly alarmed at the authorities apparent pre-occupation with her and feels progressively more isolated and alone.

Her growing feelings for fellow Cadet Cal Remus intensify as the recently announced pageant, ‘The Calling’, gets underway. Struggling to comprehend the continuous, inexplicable dreams of the mysterious Zane, discovering the past helps shape her future, with devastating personal consequences.

You can find True Calling on Goodreads

Blurb:
Some Secrets are worth fighting for

Back on Earth, Ariana is caught in a dangerous crossfire between clandestine rebel organization Clementia and the power-hungry government. Refusing to divulge the location of the secret information entrusted to her by her late father, she desperately tries to bargain for her Mom, Lily, and Cal’s rescue. She’s fighting a losing battle, and the clock is ticking.

Presented with evidence of her fiancé Cal’s apparent betrayal, she loyally defends him despite her concerns. With her emotions in turmoil, matters become even more complicated as she grows closer to her ex-boyfriend Zane.

When the stakes are raised, a succession of shocking revelations rocks her world, setting her on a path that will not only change her destiny but the fate of humanity.

Confronted by a memory so abhorrent comes a truth she would do anything to forget.

But some things just can’t be undone.
***
Beyond Reach is the gripping second novel in the True Calling trilogy, continuing the story of Ariana Skyee in the weeks after she arrives back on Earth.

You can find Beyond Reach on Goodreads

There is a tour wide giveaway for the blog tour of Destiny Rising. These are the prizes you can win:
– e-copies of the whole True calling series by Siobhan Davis. Which is the following books: True Calling, Lovestruck, Beyond Reach, Light of a Thousand Stars and Destiny Rising.
– one 10$ amazon gift card

For a chance to win, enter the rafflecopter below:
a Rafflecopter giveaway