Hi guys! It’s the last day of May which means that June is just around the corner. Where is this year going?? It looks like 2016 just barely started but we are already in June. Because of that it’s time to see some of the books that are going to be released in June. Once again, if you want more information about the book click on its cover. It will take to the Goodreads page. END_OF_DOCUMENT_TOKEN_TO_BE_REPLACED 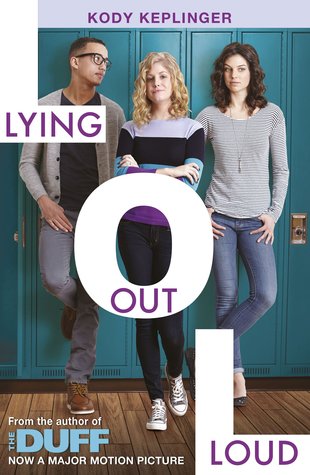 Kody Keplinger returns to the world of The DUFF in this brand-new companion novel!

Amy Rush might be the only person Sonny shares everything with— secrets, clothes, even a nemesis named Ryder Cross.

Ryder’s the new kid at Hamilton High and everything Sonny and Amy can’t stand—a prep-school snob. But Ryder has a weakness: Amy. So when Ryder emails Amy asking her out, the friends see it as a prank opportunity not to be missed.

But without meaning to, Sonny ends up talking to Ryder all night online. And to her horror, she realizes that she might actually like him. Only there’s one small catch: he thinks he’s been talking to Amy. So Sonny comes up with an elaborate scheme to help Ryder realize that she’s the girl he’s really wanted all along. Can Sonny lie her way to the truth, or will all her lies end up costing her both Ryder and Amy?

Thank you NetGalley for providing me with an eARC of this book in exchange for an honest review.

I loved The DUFF so I was pretty excited to read this book. While this book started out pretty well there was a point that I was starting to not like it. Sonny, the main character was my big problem. She is a compulsive liar and seeing that everything that she would do would always make everything worse was getting me pretty mad, especially after what she did to her best friend Amy. Basically the book talks about Sonny who ends up falling for Ryder Cross, the boy she hated in the beginning and thinks that he’s talking to Amy and not Sonny. While I understand her change of feelings I still can’t understand why she did what she did. There were some parts that I was actually enjoying the book but then that Sonny handled every situation was always making starting disliking it again. I also had a few problems with Amy and Ryder but I liked them a little bit more than Sonny. And I understand that she had a difficult life and was practically homeless but I just couldn’t like her personality. I actually loved Sonny and Amy’s friendship and it was pretty cool until Sonny messed everything because she was only thinking about herself. But the best thing about this book: Wesley and Bianca were on it. I loved them in The DUFF so I was happy to read about their lives again. The book itself was actually good and I liked the story that was created. Another thing I liked was the ending of the book. I liked how Sonny started handling the situation and tried to be honest. And that ending… I loved how it was left open and you can try to figure out what happens next.
While I didn’t like this book as much as The DUFF it was still an enjoyable read. My main problem was basically Sonny and her lies. I would recommend this book if you are interested on it and if you like light YA novels.