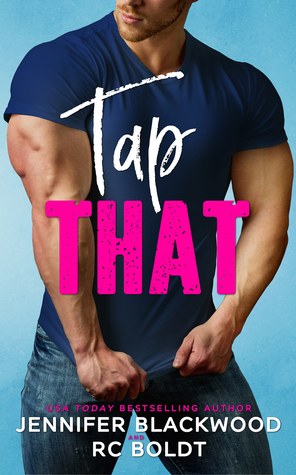 The beer’s not the only thing getting tapped.

I have a secret. It’ll get me fired if my boss ever finds out…which shouldn’t be a problem except for one thing: my coworker, Reid Morgan.

He’s cocky, aggravating, and that hot-as-sin mouth simultaneously makes me want to slap him and melt into the mattress.

Now that he’s discovered my secret, he’s doing everything in his power to take my job.

I have a problem: my pint-size spitfire of a coworker who’s primed to take my promotion.

She’s infuriating, sexy as hell, and I just can’t seem to keep my hands off her.

Now we’re both vying for the same position…and only one of us can come out on top.

You know when you are super excited for a book just to end up disappointed?? That was what happened to me with Tap That. I was really excited for this book when I first heard about it not only because I love Jennifer Blackwood books but also because it has an enemies turned lovers romance and that’s one of my favorite tropes. However, I ended up being disappointed with some things on this book that I wished could have been done differently. First of all, let’s talk about the characters.

I couldn’t connect with Reid and Callie for some reason. I don’t know why but I didn’t care about them or their relationship. I really didn’t like Callie. She got to my nerves quite a few times and she wasn’t that smart. Reid was a bit better but there was something missing. I don’t know how to  explain but I didn’t feel anything for those two and, to be honest, some of their decisions got me frustrated. I just wanted to throw my phone at the wall and poor Clay is not the one to blame. Their relationship happened way too quickly. I still can’t understand what they saw in each other and why they ended up together. They go from hating each other to really like each other really fast when I wanted to see some more development in their relationship. I also didn’t like that they didn’t talk about things. There’s some drama by the end that was kind of predictable but I’m still mad that they never discussed the issue but everything ended up working out between them.

To be honest, this could have been a great read but there were so many things that didn’t work for me which made me quite disappointed with this book. While I can’t recommend this book there are still a lot of good reviews on Goodreads so you might enjoy it. If you do it, go on your own risk because you’ll probably want to roll your eyes sometimes.