Hi guys! As you can see, it’s the end of another month which means it’s time for my monthly feature Beyond the Books where I talk about all the random things I’ve been watching or loving during that month. Here are a few things I watched and did this past month talk about.

Let’s start with something I like to call “Cátia is obsessed with k-dramas mostly because of Bong Bong and Min Min”. You might remember I started Just Between Lovers last month. To be honest, I haven’t watched more episodes because it was too heartbreaking and I was already having a few rough weeks. So I ended up starting Strong Woman Do Bong Soon and it was my BEST IDEA EVER! I loved it so much. I especially loved Min Hyuk. He’s my little cinnamon roll so don’t you dare to hurt him. Min Min is too precious and so is Bong Soon. I’m still sad that it’s over. I want those two back.

While You Were Sleeping

This month I also started While You Were Sleeping. I needed something after finishing Strong Woman Do Bong Soon and I liked the colors in the scenes I had seen before so I ended up starting. It has an interesting concept but why do I think I’ll want to slap someone every single episode? 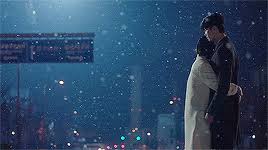 I am Not a Robot

A few days ago I also started I am Not a Robot. I’m still on episode 2 but I think I’ll like it. I’m interested to see how everything will happen. Anyway, it looks like the only thing I watched were k-dramas… which is not a lie XD.

By now everyone out has either seen or heard how amazing Black Panther. It’s true. I loved that movie so much. IT was awesome, it had a great cast but, more importantly, it deals with things we all see all over the world. Also, the woman are kickass in that movie and I want to be like them when I grow up. I have to say that Shuri and M’Baki are my favorites for sure. I loved those two

At this point you’re like, “Cátia, are you still obsessed with BTS?”. YES, I am and I’ll be for a long time. But there was progress because I listened to other things that is not BTS. First of all, James Bay is back. Do you know how happy I am about that?? I love his new song so much. Love Lies, that is part of the Love, Simon OST, was also released this month and, once again, I’m pretty much in love with that song. There are a few other things I’ve been listening. I also started listening to K-pop that isn’t BTS and I ended up getting obsessed with Palette. I totally blam that super aesthetically pleasing music video. Anyway, here are some things I’ve been listening to during the month of February:

Here’s what I’ve been doing Beyond the Books during the month of February. I’ll be back next month to see with I ended up doing. If you like any of the things that I’ve talked about don’t forget to comment too so we can fangirl about it :D. And if you have any recommendation don’t forget to tell me in the comments.