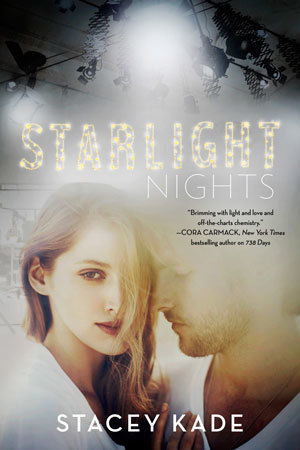 At twenty-three, Calista Beckett is trying to overcome her early fame and fortune. The former savior of the world on Starlight is now a freshman at college–miles away from L.A. and her former existence. She sees it as her start to a new life, a normal life, one where she won’t make the same mistakes she made before–a brush with heroin addiction and losing her freedom to her controlling mother, thanks to a court order.

Eric Stone played her older brother, Byron, on Starlight. But she’s been in love with him pretty much since they kissed–her first kiss–while auditioning. When Eric shows up on campus out of the blue asking her to return to California for a role, Calista’s struck immediately by two things: first, in spite of everything that’s happened, she still feels something dangerous for him, and second, she’s absolutely determined not to let him ruin her life again.

Only Eric’s not giving up so easily.

Being that this was my first Stacey Kade book I didn’t really know what to expect from it. I did end up enjoying Starlight Nights a lot but it still had a few problems.

First of all, I loved how flawed the characters in this book were. Calista started out as this weak girl who didn’t know how to control her life and Eric was kind of a douchebag but I ended up loving how much they grew in this books and I loved their development. I also loved that they didn’t try to change each other but instead they ended up accepting each other flaws while trying to be better people. I also liked their relationship even if at a certain point I couldn’t see those two working their issues out. Their lives were really messed up. Talking about messed up lives… I despise Calista’s mom and Eric’s dad. They are both such terrible people. I hated how much they did to hurt their kids and let me tell you that those two frustrated the hell out of me… I really wanted to throw my phone to the wall in some situations.

As I said before, this was my first Stacey Kade book so I didn’t know what to expect from her writing. I ended up enjoying it but I have to say that it’s a book that started out quite slow and it took me a little bit to get used to. However, the thing I liked the least in the writing was the flashbacks. Don’t get me wrong, flashbacks can be amazing to understand the plot but sometimes it would be too sudden and I would end up confused.

Overall, this ended up being an enjoyable read. I really liked the plot and the setting and while I still had a few problems with this book I still think it would be a great read to anyone who loves to read these type of romances.