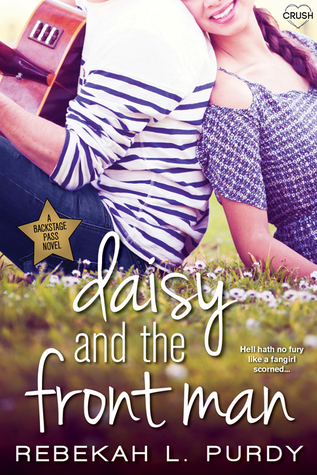 When Daisy Morris finds out she’s spending the summer with her dad, bodyguard for Seconds to Juliet—the hottest boy band around—she knows it couldn’t be more perfect. But not because she’s a fan. Oh, no. Because ever since front man Trevin Jacobs completely humiliated her by standing her up for homecoming, Daisy is out for a little revenge. Yup, Trevin Jacobs is goin’ down…

When one of his bandmates bets Trevin he can’t make Daisy—the gorgeous but surprisingly ice-cold daughter of their bodyguard—fall in love with him, it’s a bet he can’t resist. Sure, Daisy won’t give him the time of day for reasons he can’t understand, and her dad’s hell-bent against his little girl spending time with a superstar. But the terms are set, and Trevin is determined to make Daisy fall…hard.

If you have been following me for a few months you might know I’ve been trying to make progress with the Backstage Pass series for a few months now. A couple of months ago I read the first and second books in the Backstage Pass series, Aimee and the Heartthrob and Mia and the Bad Boy, and I had a lot of problems with both but especially with the last one. As I said at the time I requested the complete Backstage Pass series to NetGalley because I love rock star books, I love cute young adult contemporaries and I love Entangled: Crush. The series has five different books that are written by different authors and at first I was hoping I would love it but now I don’t even know if I want to finish it or not. I did read Daisy and the Front Guy and enjoyed a little bit more than the previous ones but I still had a lot of problems with it.

I’m getting to the point where I’m almost sure my main point with these books are the characters because I can’t like them at all and with wasn’t different with this one. I had a lot of problems with both Daisy and Trevin and I don’t even know how to put that in words. I didn’t like that much and I didn’t like most of the things they did. For example, Daisy was childish as hell. I didn’t really like that side of her especially because she was getting a revenge for a stupid thing. I understand she felt humiliated and ended up hurt by what happened between her and “Trevin” in the past but the truth is he was not guilty in anything and had no way to know what she was talking about. Also, the whole revenge plot had me mad with her because she could have ruined a lot of things in his life with her stupid pranks. However, Trevin wasn’t better because as soon as she got there he and Ryder had a bet going on about how he would be able to have Daisy fall in love for him by the end of the summer… REALLY? I did like them by the end of the book and they grew a lot on me. To be honest, they are my favorite since I started the series. I also really liked them together because when they were together they were super cute and fluffy.

However, I have another problem with this series and that problem is the characters ages. Everyone in these books are teenagers but they all act and think like adults, especially the guys. Sometimes I think the story itself would work better with older characters because some things that happen and they say are weird for teens. This is something that has been on my head since book one and it has been one of the main problems since then. There was one thing that got better from the second book to this one and that was the relationship between the band. In Mia and the Bad Boy the guys in the band don’t even try to get to know each other and don’t really have a relationship between them but I did like how present they were in this one and how much they were on Trevin’s life.

Overall, I still had a few problems with this book but I liked it way more than the previous two. However, I still don’t know if I’ll keep reading the series or stop here because I’m not enjoying the series that much to be honest and I would rather read something else on that time. Let’s see how that goes in the next few months. I’ll end up deciding something soon :D.