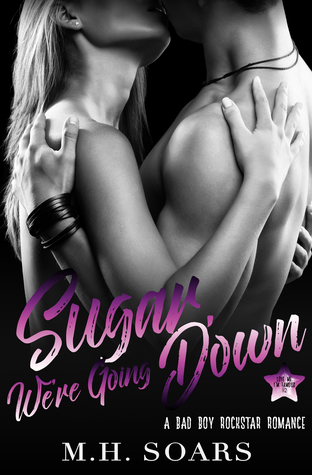 Oliver Best, former rockstar, heir to one of the largest fortunes in Great Britain, and the country’s most infamous bad boy.

Saylor Blue Carter, college drop-out, lead singer of a struggling band, not a penny to her name.

When they met, it was hate at first sight. Oliver was an arrogant ass. Saylor was a cold hearted bitch. These were the thoughts they had for each other. Until that kiss. That life altering, earth shattering, nuclear kiss. They knew what that kiss meant. They knew anything between them would be explosive and without hope for a happily ever after. So they vowed to forget, they tried to stay away. But now with their best friends’ wedding approaching, all bets are off.

Once again this was a buddy read with Cristina @ My Tiny Obsessions so click go check her blog to read her thoughts about this book :).

Having read both Wonderwal and Catch You previously I really wanted to read Sugar, We’re Going Down because to be honest Saylor and Oliver were some of my favorite characters and I wanted a book about them. Well, let me tell you this book wasn’t what I was expecting and I didn’t enjoy it as much as I wanted to.

As I said before, I really loved Saylor and Oliver in Wonderwall but for some reason I didn’t like them as much in this one. It looks like reading from their POV’s didn’t help at all. While I still think Saylor is a kick ass girl I also think she has a lot of things she needs to deal with and it would have been so much better if she had opened up about that to someone. I don’t even know what to say about Oliver… I think his story wasn’t fleshed out and I didn’t get the sense of who he is and how he is. There was something missing about these characters that didn’t make me connect with them. Also, while they were hot together I still think there wasn’t that much between them the things were way too fast… actually, the whole book was kind of fast and that caused a weird pacing. I still enjoyed the story and I really need to know what is going to happen next. Come on, I need to know if Saylor will change her mind about a certain thing.

But here’s the thing that frustrated me the most. Saylor and Oliver are about to be the maid of honor and best man in Liv and Sebastian’s wedding (the main characters from Wonderwall) and that’s why Oliver ends up moving to California. Not only that but Liv and Sebastian are some of the most important people in Saylor and Oliver’s lives. I was really annoyed that they barely showed up in this book and when they did it was only to bring drama. I didn’t like that in the end Saylor and Oliver barely cared about their best friends wedding. And I especially didn’t like that there was some unnecessary drama between Liv and Bas in the day before their wedding. I’m still trying to understand why that would happen because everything was solved in less than 2 hours and nothing changed to any of the characters. There were a few more things I didn’t like in this book but the main thing is that there were a lot of things that were not explained. This book will have 3 parts (more about that later) so there are a lot of things that were talked about or mentioned but in the end nothing was discussed about those things. For example, we know something might have happened in Oliver’s past but do we know what? NO. I’m still trying to figure out what the hell happened that left him so messed up. I also would have loved to see Saylor and Oliver talking about her past and about what was happening in her life and that just didn’t happen and it frustrated me because I needed them to talk about those things. Now, here’s the thing, I feel betrayed right now. I had NO IDEA there would be two other books about Saylor and Oliver, like no idea at all. I started suspecting it when I was at around 90% of the book and there was still a lot to be talked about. I would have been okay if it was something without a cliffhanger, but noooo… it has a huge cliffhanger and while this was not the best book I’ve ever read I still want to read the other two because I need to know what happens next. However, while I do understand why the author thinks she needs two more books (these are her books after all) I still think that if things were done in a different way those would not be necessary and everyone would be super happy by now.

Overall, while I enjoyed this book it still had a lot of problems that I hope are solved by the next book. However, I do want to read the next two parts because I need closure and I really need to know what will happen next. I’m also hoping to get to know a little bit more about Oliver and his past.