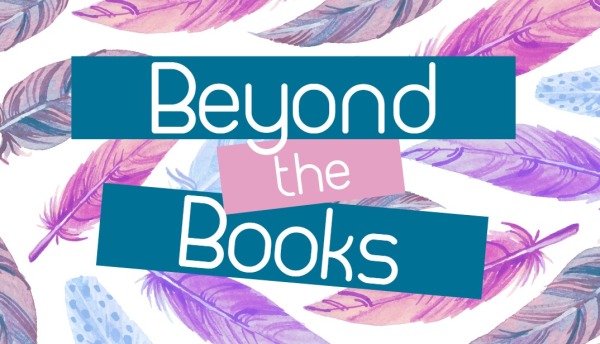 Hi guys! It’s the end of the month which means it’s time for my monthly feature Beyond the Books where I talk about all the random things I’ve been watching or loving during that month. January was a weird month. I didn’t do a lot this month. For some reason I wasn’t in the mood for watching TV shows or movies and I also didn’t listen to a lot of music… it was weird, especially because I had a week off from work and I could have done a lot of things. But I did read a lot so that’s a plus. I still have a few things I loved during the month of January so I’ll have a few things to talk about. Let’s see what I’ve been watching and listening to.

In January I finally started Yuri!!! on ICE. I’ve been meaning to start it for a couple of months because it’s about figure skating and I love figure skating but I waited until the complete season was out to start it. So far I only watched 3 episodes and I really like it but for some reason that’s not what I was expecting. I still want to watch the episodes I have left and I’ll try to do it in February.

Shadowhunters is back and for once I’m not really excited for it. I only watched the first episode of season 2 but to be honest I didn’t like it at all. I also keep hearing season 2 is not that great what makes me want to watch it even less and I hate that they keep changing things. Yes. I know about what happened in the last episode that aired and I’m not happy at all. Let’s just hope it gets better because if it does I’ll keep watching but if it doesn’t I don’t think I can do it. But hey, at least Magnus and Alec are back and I’m living for their scenes on Youtube.

A Series of Unfortunate Events

A Series of Unfortunate Events finally premiered during the month of January and I did watch one episode. I liked it a lot even if it was too depressing and I’ll be watching the remaining episodes when I’m in the mood for TV shows again… let’s just hope that doesn’t take a long time.

I know I haven’t been telling how much I love The Royals that much but I do and I need to talk about it more. Season 3 premiered in the beginning of December but I only watched it in January. So far I watched the first 5 episodes from season 3 and you can’t imagine how much I missed my babies. Like always that show still breaks my heart. A lot as happened to the Henstridge family that changed everything and while some people are happy others aren’t. Also, Len and Jasper are super happy but I know it won’t be like that for that long so my heart is already hurting in anticipation. Anyway, I love this show and it keeps getting better.

Beauty and the Beast

For some reason portuguese TV has been airing a lot of Disney movies and I’m living for that. This month I watched Beauty and the Beast. I haven’t watched this one for a long time but I still loved it the same I did before. Also, it was great to refresh my memory before the live-action Beauty and the Beast is released. I’m telling you, if that movie sucks I’ll riot.

Funny thing, I never watched Kingsman until yesterday. I heard about this movie and I wanted to watch it for a long time but I never got around to do it. Yesterday it was airing on TV and I thought it would be the best time to watch it. I really, really liked this movie. It was funny and weird and I loved it. It might have had a few weird sequences but that only made everything better. Also, Taron Egerton is adorable so why wouldn’t everyone want to watch this movie?

Also, Ed Sheeran released two new songs and I love it as much as I love almost everything Ed Sheeran does. Anyway, here are some of the songs I’ve been listening to:

Here’s the thing, I’m going to move in February so the past month has been me thinking about what I want to do to my bedroom when I move. I’ve been watching Mr. Kate‘s videos for over a year and I love her Youtube channel but my favorite series has to be OMG We Bought a House and especially OMG We’re Coming Over because she does a lot of DIY’s and gives a few tips about some decor stuff. She just has an amazing channel.

Here’s what I’ve been doing Beyond the Books during January. I’ll be back next month to see with I ended up doing in February. If you like any of the things that I’ve talked about don’t forget to comment too so we can fangirl about it :D. And if you have any recommendation don’t forget to tell me in the comments.