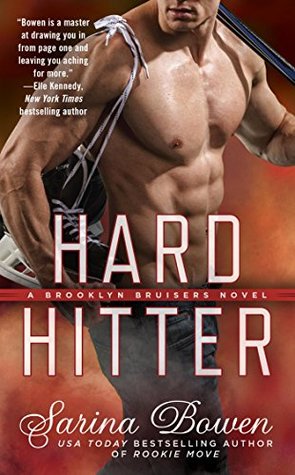 From the USA Today bestselling author of Rookie Move comes the second novel in the series that’s hot enough to melt the ice.

He’s a fighter in the rink, but he’s about to learn that playing nice can help you score…

As team captain and enforcer, Patrick O’Doul puts the bruise in the Brooklyn Bruisers. But after years of hard hits, O’Doul is feeling the burn, both physically and mentally. He conceals his pain from his coach and trainers, but when his chronic hip injury becomes too obvious to ignore, they send him for sessions with the team’s massage therapist.

After breaking up with her long-term boyfriend, Ari Bettini is in need of peace of mind. For now, she’s decided to focus on her work: rehabilitating the Bruisers’ MVP. O’Doul is easy on the eyes, but his reaction to her touch is ice cold. Ari is determined to help O’Doul heal, but as the tension between them turns red hot, they both learn that a little TLC does the body good…

By now a lot of you might know how much I love Sarina Bowen’s books and after reading and loving Rookie Move (which was one of my favorite books of 2016) I was really excited to read Hard Hitter and see where the book would take O’Doul and Ari. Unfortunately I didn’t love this book as much as Rookie Move but I still loved it anyway… it just took a direction I wasn’t expecting.

As I expected, I really loved Patrick O’Doul. In Rookie Move he had some kind of mystery around him so I was excited to learn more about him and why he became the way he was. I loved him and I loved almost everything about him. At one point I thought something really bad had happened to him in his past and while something did happen it was nothing of what I was expecting, thankfully. I really loved O’Doul’s passion for hockey and how he would do anything for it but what I loved the most was how much he cared for Ari and how he showed it right from the beginning and how he would fight for her anyway. There were a few moments where he did stupid things but come on, everyone makes mistakes. Basically I loved O’Doul. He wasn’t Leo but anyone can be Leo to be honest. In the other hand, I didn’t like Ari as much. I could see where she was coming from but that girl frustrated me a lot of times with all that fighting against her feels and follow her head. It’s important to think before doing some things but that girl took way too much time. I did like Ari and how she knew what she wanted with her life but there are a few things that could have been changed. I did love her relationship with O’Doul and they had an amazing chemistry. I also liked their moments together but there was something missing between them and I think there were a few things that should have been talked about that weren’t.

Once again I really loved the writing style in this book. I already kind of know Sarina Bowen’s writing style and I love it. I love how it’s a fast pacing read but with a lot of deep and I love that she used a dual POV. This why I want to read more of her books in 2017. I know I’ll love it.

Overall, this was a good book. While it wasn’t as good as the first book in the series I still liked it and I can’t wait to able to read Pipe Dreams… I’m really excited for that one.  If you like romances you should definitely give this one a try. And if you never read any of Sarina Bowen’s other books what are you waiting for?