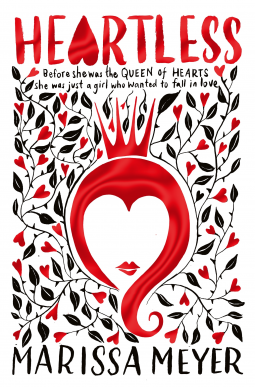 Long before she was the terror of Wonderland—the infamous Queen of Hearts—she was just a girl who wanted to fall in love.

Long before she was the terror of Wonderland, she was just a girl who wanted to fall in love. Catherine may be one of the most desired girls in Wonderland, and a favorite of the unmarried King of Hearts, but her interests lie elsewhere. A talented baker, all she wants is to open a shop with her best friend. But according to her mother, such a goal is unthinkable for the young woman who could be the next queen.

Then Cath meets Jest, the handsome and mysterious court joker. For the first time, she feels the pull of true attraction. At the risk of offending the king and infuriating her parents, she and Jest enter into an intense, secret courtship. Cath is determined to define her own destiny and fall in love on her terms. But in a land thriving with magic, madness, and monsters, fate has other plans.

In her first stand-alone teen novel, the New York Times-bestselling author dazzles us with a prequel to Alice’s Adventures in Wonderland.

If you know me you know how much I loved The Lunar Chronicles so when I heard Marissa Meyer was writing a new book I got really excited. I was even more excited when I saw it on NetGalley. I requested it thinking the publishers would never approve my request but I tried anyway. But guess what? They approved my request and I was so happy to have the opportunity to read it earlier.

Here’s the thing, I’m one of those people who didn’t love Alice in Wonderland but I was excited anyway with this retelling because it was about how the Queen of Hearts became the Queen of Hearts and I liked that we were going to have a back story for the villain instead of the heroes. While I didn’t love this book as much as I loved The Lunar Chronicles I still enjoyed this one a lot.

I really enjoyed the characters in this book. Here’s the thing, no one is perfect starting with Cath, the main character. While Cath has her dreams she still does almost everything her parents tell her to please them even if it’s not what makes her happy. Well, this happens until a certain point where she tries to fight for what makes her happy. I really liked Cath and how much her passions cared for her. I also loved her friendship with Mary Anne (at least most of the times). I just think Cath was an amazing character and she had a great development. I would have liked if every character, at least the most important ones, were as developed as she was because sometimes there was some things missing in other important characters. This actually happened a lot with Jest. I would have loved to see more of him and see his character develop and also share more about his life. There was just something missing. I still loved him a lot so that’s good. I also loved to see a lot of characters I knew from Alice in Wonderland and to see why some characters ended up being like they are in the original story. I think it was really interesting to have this kind of things in this story because while it’s the Queen of Hearts back story it’s still important to show how the other characters were before everything.

I really liked the story and the way it was told. I did predict something was going to happen because it made sense but I also spent most of the book trying to figure out how it would really happen because I had no ide how this thing would end. Also, can we talk about how was hungry most of the time I was reading this book?? Not only Cath is an amazing baker but the food descriptions are sooo good. I would have eaten most of the things that were in this book and I would be a happy girl. Let’s just say I now know why the Queen of Hearts is a big girl because that’s what happens when you eat so many delicious pastries and pies.

Once again, I loved Marissa Meyer’s writing style and there’s a reason why she’s one of my favorite authors and why I’ll keep reading every book she releases in the near future.

Overall, I really liked this book a lot. I think I would probably have liked it more if I actually enjoyed Alice in Wonderland. I still really liked all the references and the overall story. So yeah, you should really give this one a go. Just don’t think it will be anything like The Lunar Chroniclesbecause it won’t.