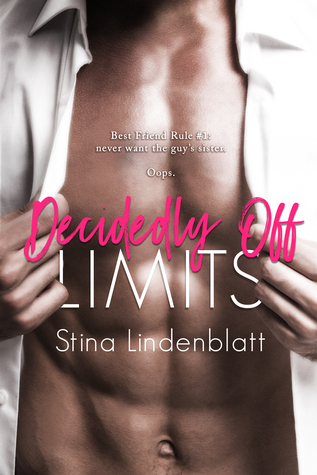 Trent Salway is one of San Francisco’s hot up-and-coming-under-thirty bachelors. A highly successful mutual fund portfolio manager, a workaholic, and a ladies’ man, he’s got everything he could possibly want…except one thing.

Physical therapist Kelsey Quaid dumped her ex-fiancé six months ago because she was tired of not even being a distant second to his career. Which is why despite secretly crushing on her big brother’s best friend for as long as she can remember, there’s no way Kelsey can go there. One workaholic in her life is more than enough, thank you very much.

Before Kelsey’s brother leaves on his Navy SEAL mission, he asks Trent one simple request: make sure Kelsey isn’t dating any assholes while he’s away. As Trent does his best to do just this, he and Kelsey spend more and more time together. Sparks fly, as do a few items of clothing, and the next thing they know things are getting physical between them. Now, Trent has to decide what to do about the woman he’s falling for—the one whose brother would take him down faster than he takes down the enemy. And Kelsey will have to decide if Trent is just another workaholic or if he’s decidedly off limits.

But first, let’s talk about the characters. I really liked Kelsey and Trent. I loved to see Kelsey doing things to trying to find herself and I loved to see how much she loved her job and her family/friends. I also really liked Trent. He really did care about the people he loved and it was great to see him overcome his trust issues. However, there was something missing on these characters. One thing I would have loved was to see Trent and Kelsey talking about more about their lives. We know that Trent has a lot of trust issues but I would have liked it to play a bigger role in the story. One thing I really liked was the chemistry between them. Because they had known each other for years and had feelings to each for years we didn’t have the “get to know you” stage but it was still pretty great to see them together. I would have liked to see them together even more.

I also really liked the story but it was missing something and I can’t really explain what. I just think this book should have had more drama… and this is saying a lot because most of the times I get mad because some books are too overdramatic. There’s was a point where they broke up and I still can’t understand why it happened??

Another thing I liked was the writing style. Here’s the thing, this is a romantic comedy and I loved it. I loved to read Kelsey and Trent’s internal monologues… I was constantly laughing and that’s a great thing.

Overall, this was an enjoyable book. While it still lacked something it was funny and an entertaining read. If you need something easy and funny you should give it a try.

3 thoughts on “Decidedly Off Limits by Stina Lindenblatt – eARC Review”