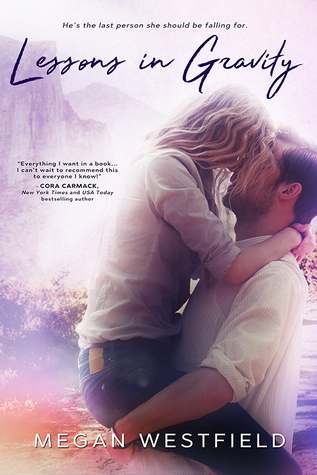 All eyes are on Josh Knox…

April Stephens’s dream to be a documentary filmmaker rests on her acing her internship with Walkabout, and that means getting the abrasive Josh to give her more than one-word answers in his interviews.

The problem is, with every step forward professionally, she and Josh are also taking a step forward personally, and after watching her stunt pilot father die in a fiery crash, a guy who risks his life for a living is the last person she should be falling for. Especially because in one month her internship will have them dangling three thousand feet in the air from the side of the Sorcerer. She’ll be filming. He’ll be climbing without a rope.

When I first saw this book on NetGalley it looked super interesting. I never read a book about rock climbing or even about someone who would love to make documentaries. I also knew that April and Josh’s relationship wouldn’t be easy due to April’s past and Josh’s job. However, this book wasn’t what I was expecting and in the end it was kind of a disappointment.

One of my main problems with this book was the pacing. It was so slow. Not only was a slow book but it was mostly boring because there was not a lot happening in most of the book. I think this might have been mostly because the book was only told by April’s POV. Maybe if it had a dual POV it would have been more interesting, especially because Josh was a mystery for a big chunk of the book.

Another problem I had was April. I don’t why but I really didn’t connect with her. I had a lot of problems with things she did and she didn’t do. I could understand where she was coming from because it wasn’t easy to see her dad dying doing something so dangerous but she should have done a lot of things differently, especially after learning about Josh’s past. I did like Josh even if he was such a mystery. In the beginning I had a lot of problems with him but once he started opening up to April everything got better and he grew on me. Now here’s another problem I had with this book: their relationship. I didn’t feel the chemistry at all between them. They had a lot of cute scenes and they talked about things but they didn’t talked about the important things that happened in their lives… well, April didn’t. Their relationship didn’t seem real to me. It also didn’t help that it was kind of instalove.

One thing I did love was the writing and how Megan Westfield described Yosemite and the rock-climbing process. I spent part of this book wanting to travel there even if I don’t do the camping thing. I like my bed, internet, electricity and having a bathroom very much. But I really wanted to be in Yosemite while reading this book so bonus points for the author for the way she described it.

Overall, this was a book that had a huge potential but there was a lot missing on it. It did get better towards the end but it didn’t blow my mind. While I had my problems it was still an enjoyable read at some points so you should give it a try if it’s something you think you would enjoy. One thing is for sure, I’ll give Megan Westfield’s books a try again in the future.

3 thoughts on “Lessons in Gravity by Megan Westfield – eARC Review”