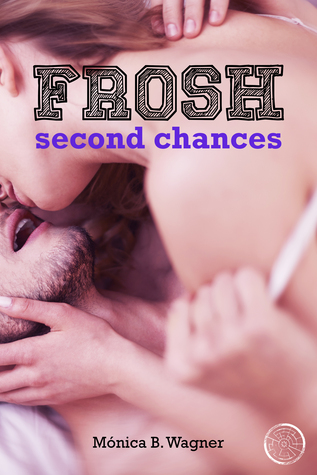 In FROSH: FIRST BLUSH, Ellie, Grant, Devon, and Charlie spent their welcome week falling head over heels for each other—before totally falling apart. Now, in FROSH: SECOND CHANCES, they’ll have to pick up the pieces.

After ruining Grant’s football career (and her own reputation), Ellie has been trying to lie low—which means not making more enemies. But some students still want her to pay for what she did, and now, Ellie’s determined to fight back—and fight for Grant.

Grant is adjusting to his new reality: no more football means no more free passes in class, and definitely no more distractions; especially from Ellie, whom he misses even after she destroyed his world. Can he find a way to move on without her—and without football?

Devon finally has it all: her brother’s sober and her boyfriend is an adorkable genius. But when her parents threaten to tear her and Charlie apart because he doesn’t ‘fit’ into their high society, she will go to dangerous lengths to prove that nothing—nothing—can defeat Devon Connors.

Charlie’s never questioned who he is: pre-med science geek, and now, Devon Connors’ boyfriend. But when he discovers a secret about his past, Charlie isn’t sure of anything—especially whether he can trust Devon with the truth.

Perfect for fans of Cora Carmack and Colleen Hoover, Monica B. Wagner’s sexy New Adult series follows these four characters all the way to winter break—when the only thing they’ll want more than first love is a second chance.

Once again this was a buddy read with Cristina @ My Tiny Obsessions so HERE to read her thoughts about this book :).

As you might have seen a couple of days ago, I finally read Frosh: First Blush. Once I finished that book I had to start this one right away because I just can’t deal with cliffhangers. Unfortunately, I didn’t like Second Chances as much as First Blush and I had a few problems with this book.

First of all, let’s talk about the characters. In First Blush my favorite characters were Grant and Charlie without any doubt. I had a lot of problems with both Ellie and Devon and that problems only got worse in this books. Charlie and Grant barely had any development in this book and I didn’t like that at all. I wanted to see more of them and I wanted to see the chances in their lives due to what was happening to both of them. I didn’t see that at all. Grant spent most of the book thinking about Ellie, even when he had other problems in his life. Charlie became closed and never shared any of his insecurities with Devon until the moment everything blew out. Once again, big miscommunication problem. These characters need to learn how to talk to each other. Ellie kept being frustrating as ever and she kept fixed in things, that were not as important as they thought it were, but I kind of felt bad for her most of this book. Devon… I don’t even know what to say about her. I admit that she grew on me in the first book but I really didn’t like her in this one. I hated everything she did and I hated that she never talked to Charlie to explain why she was doing those kind of things and why she was so distant. I really didn’t like her in this one. The romances also didn’t work for me at all. This book is set 2 to 3 months after the events on First Blush. That means that in the past 3 months that they knew each other Ellie and Grant only spent some days together. However, they can’t stop thinking about each other and they love each other… I don’t know about you but to me this is a LOT of instalove. I kind of liked Charlie and Devon’s relationship but that was before the screwed everything up.

The writing in this book was okay. I liked it. I liked the 4 POVs and that they had distinct voices but there was something missing. However, I still want to read book 3 because there was too much left open and I need to know what will happen next.