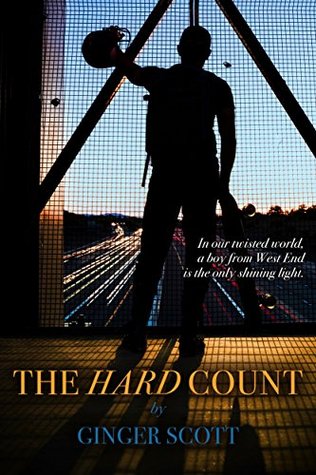 Nico Medina’s world is eleven miles away from mine. During the day, it’s a place where doors are open—where homes are lived in, and neighbors love. But when the sun sets, it becomes a place where young boys are afraid, where eyes watch from idling cars that hide in the shadows and wicked smoke flows from pipes.

West End is the kind of place that people survive. It buries them—one at a time, one way or another. And when Nico was a little boy, his mom always told him to run.

I’m Reagan Prescott—coach’s daughter, sister to the prodigal son, daughter in the perfect family.
Life on top.
Lies.
My world is the ugly one. Private school politics and one of the best high school football programs in the country can break even the toughest souls. Our darkness plays out in whispers and rumors, and money and status trump all. I would know—I’ve watched it kill my family slowly, strangling us for years.

In our twisted world, a boy from West End is the only shining light.
Quarterback.
Hero.
Heart.
Good.
I hated him before I needed him.
I fell for him fast.
I loved him when it was almost too late.

When two ugly worlds collide, even the strongest fall. But my world…it hasn’t met the boy from West End.

I don’t even know how I’ll express how much I loved this book in this review. This is my second Ginger Scott book. About a month ago I read In Your Dreams and loved so when I got the opportunity to read this one I did it and good thing I did it because this book is so good and I loved it so much.

Unlike In Your Dreams, The Hard Count is YA. The book is set on high school and both main characters are 18 years-old and are in their senior year. I loved everything about this book and I got emotional a lot of times while reading this.

But let’s start by talking about the characters. Reagan comes from a “perfect” family that is everything but perfect. Her family is crumbling mostly due to the stress that comes with having the father as the football team coach and having a brother as the star quarterback. While her family is always in the spotlight, Reagan is always in the background working on her documentary that could get her in the college of her dreams. On the other side we have Nico. Nico comes from a dangerous neighborhood from where he wants to escape. Unlike almost everyone in school Nico has a scholarship and has Mexican ethnicity, which means he’s an outcast. Nico and Reagan might look complete different but once they start helping each other we can start seeing how much alike they are and how great they are for each other.

I loved both Reagan and Nico. I loved how much they cared not only about each other but also their family and friends and how strong they were. I also really liked how they were kind of enemies when the book started because they were always challenging each other in the class they had together. I mostly loved them together because they had such an amazing chemistry and because we could see how important it was for them to help each other, especially Reagan. That girl did everything so that Nico could achieve bigger things. She was always there for him and it was amazing how much she believed in him and she knew he could be even better in what he did. One of my favorite things about them is that once they were together they were together for real. There was no drama between them after which was great because those two already had too much things going on in their lives.

I also really liked their families and friends. All of them were so supportive of each other and I loved to see how important family and friendship was in this book and that it wasn’t all about romance (even if I do love a lot of romance).

The story was also amazing. As I said before this book was mostly about family. Not only about biological families but also the football team that everyone considered as a family. Even when the team was on field you could see how much they cared about each other. Being a book about sports it had a lot of football moments. There were a lot of games and gameplays that I really didn’t understand because I never watched a football game (I’m sorry I only watch European football that a lot of you might call soccer) and believe me that by the end of this book I wanted to watch football which is weird because I’m not into sports (unless Portugal is playing and winning the Euro 2016 XD).

I could have a complain about this book because it was mostly told from Reagan’s POV, and I’m a sucker for dual POV, but Reagan was so amazing as a narrator and Ginger Scott did such an amazing job with the writing that I loved it anyway. I wouldn’t mind knowing what was going on in Nico’s head but I didn’t miss his POV as much as I thought I would. And please Ginger, try not to break my heart by making me thinking that something really bad happened to a certain character. My heart stopped beating for a little bit and I was scared that something bad would have happened :P.

Overall, this was such an amazing book. Ginger Scott did an amazing job by writing an emotional journey to Reagan and Nico and I loved how she did it. I 100% recommend this book to everyone because it’s such an amazing story and everyone should read it.

13 thoughts on “The Hard Count by Ginger Scott – eARC Review”