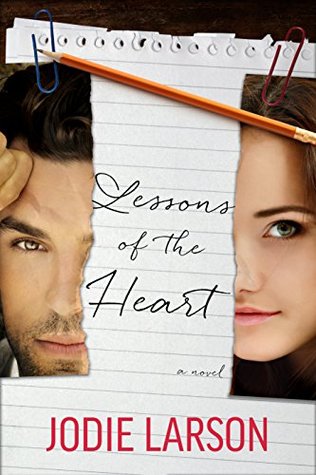 The first time we met, James Dumont knocked me off my feet.

He’s sexy and smart, the classic good guy…. Exactly what I want, and everything I’ve ever dreamed of. The most perfect guy at Somerset High School.

He even makes sixth-period Geography interesting.

Everyone says high school is tough. Fighting my attraction to James? That’s the hardest part, because this guy, my perfect match, the one who makes my heart overrule my head…

What if the greatest lesson you could learn in school couldn’t be found in a book?

Once again this was a buddy read with Cristina @ My Tiny Obsessions so click HERE to read her thoughts about this book :). Actually be sure to check her review because she talked about a few things we had problems with that I will not talk on my review

When I read the blurb for this book on NetGalley I was so excited to read it. I love forbidden romances and one of my favorite books has a student/teacher relationship that I loved. Not only that but I also used to love Pretty Little Liars and I was a big Ezria shipper. I loved Ezria with all my heart. So when I got this book I was expecting this…

… but in the end I ended up getting this:

I had so many problems with this book that I don’t even know where to start. I’m not even kidding about all the problems I had with this book. While reading this I had a notebook next to me (something that doesn’t happen that often) and from everything I wrote I’m pretty sure that only one was a good thing. Because I have a few things to rant about this review will have a lot spoilers. Also, I’m sorry if this review is a little bit all over the place. I just have a lot of thoughts about that and I don’t know how I’ll be able to express my feelings in a coherent way.

Britta is supposed to be a mature 18 year-old. She’s intelligent, popular, her life is on track and she’s very responsible. James is a 22 year-old teacher who is also supposed to be very responsible. I didn’t connect with them at all. Britta was really immature (even if was supposed to be extremely mature) and spent a lot of time crying and James was kind of weird. What kind of guy follows his 18-year-old student to another city and gets a hotel room right in front of her room?? For me that is stalking and a little bit creepy. I just didn’t like them and everything that did or said ended up making me like them even less.

But to be honest there was only a character in this book that I actually liked and it was Britta’s older brother Liam. To be truthful, Liam was the only thing I did like in this book.

With them being mature and responsible like this you would think they would try to control themselves when they realized they were attracted to each other, right?? Well, nope. That’s completely wrong. These two had no self-control at all. If they saw each other and they thought they were alone they would be making out no matter out. I can’t even count how many times they kissed in the school grounds. With everything they did I’m actually pretty surprised that they weren’t caught earlier because they weren’t careful with where they would kiss. Wouldn’t it be easier if they actually spent time on his house where no one could see them?? Just like it happened in PLL? Also, they were both the jealous type and they couldn’t even try to not show how jealous they were.

Also, can we talk how Britta got really mad when James when he called her “teenage girl”. I’m sorry sweetheart but you are a teenage girl so there’s no reason to be mad at him.

Also their relationship was pretty unrealistic. First of all it was instalove. I don’t like instalove and I said it before. Secondly, their lines were so cheesy. The whole book was cheesy. Almost from the beginning they would say how that was forever, how they were meant to be, that they loved each other and that they were soulmates. But wait, they didn’t say any of these things once. No, they said almost every single time they were together and it became pretty repetitive after a few chapters. Even the epilogue was pretty cheesy and even included they moving in together and getting engaged after a really lame speech. And just so you know for me to say something is cheesy it really has to be because I love everything that is romance and I couldn’t deal with the romance and all the romantic lines in this book.

Another thing I really hated was the double standards in this book. Right in the beginning it is known that a teacher was fired (the one James is going to replace) and there are rumours that he was sleeping with a student (which it wasn’t true). When that happened Britta and her closest friends were really judgmental about it and even slut-shamed the student they thought was sleeping with the teacher. However when they found out that Britta and dating (and having sex) with a teacher they were all really happy about it and wanted to know everything about it. How can they be okay with that when in the beginning of the year they were saying how wrong it was?

Then we have the main conflict in this book. First of all let me talk about Chase, Britta’s so-called friend. So Chase was Britta’s childhood friend however when they start growing up he started to hit on her even if she said a lot of times she wasn’t interested and she wanted to be only friends. However he didn’t accept a no as an answer and he did try to get her drunk and even touch her in different times. What does she do?? She forgives him… WTH??? I’m sorry but if someone did the same to me I would never forgive him. I would cut him off from my life the first time he tried to do something like that. Britta ends up stop talking to him but then she puts herself in a position where he’s able to blackmail her. That’s what happens when you’re not careful and kiss your boyfriend/teacher in the school parking lot. It’s never a good idea. But you know, Britta being the smart girl she is gets a plan so she can’t get away from Chase’s blackmail (and a really twisted plan).

This book could have 2 stars pretty easily but then they had to do something that was one of the stupidest and terrible things I have ever read about and that made me lower this book rating to 1 star. I just couldn’t understand why they would do it. Okay, Chase was blackmailing her and she needed a way out of it but tricking him and a teacher to had sex with each other it’s not okay. What she and her friends did was beyond wrong and I’m pretty sure she could have think about something else to get revenge from Chase without include a teacher having sex with a student without knowing (basically both Chase and the teacher were tricked into thinking they were having sex in a dark closet with another person because both of them were seduced by different people and not the ones that were in the closet). Can you see how wrong and twisted that is?

Overall, this book was a huge disappointment. There were a lot of things that happened and I wasn’t okay with most of them. I talked about most of the things that were problematic to me but there were more situations that I could rant about. I wouldn’t recommend it but to be honest this book has amazing reviews on Goodreads so you could like it even if I didn’t.

13 thoughts on “Lessons of the Heart by Jodie Larson – Review”