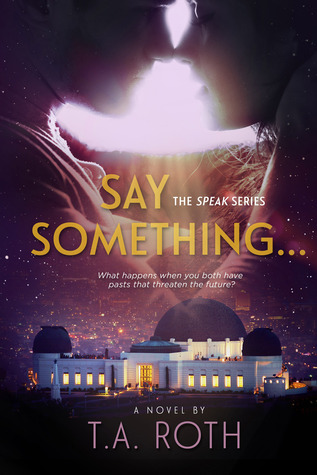 Chemistry
What most girls search a lifetime for…
I felt it the minute he set those whiskey colored eyes on me.
Magnetism
We had it in spades…
My body was drawn to hers the moment she set foot into the room.
What happens when you both have pasts that threaten the future?
Do you do nothing?
Or
Do you Say Something?

22 year old Ari Munoz is used to keeping men at arm’s length. So when her best friend Vonne guilts her into going to a frat party, she couldn’t think of a worse way to spend a Thursday night. That’s until she sparks the interest of love’m and leave’m Ben Rodriguez. The electricity she feels when they lock eyes is something she’s never felt before.

22 year old Ben Rodriguez has it all. He’s a football star, president of his fraternity, and well known ladies’ man. His endless pick of beauties, makes him the envy of all of his fraternity brothers. So why are a pair of long legs and hazel eyes making him want to throw out all of his rules?

*This novel deals with adult themes and language. 18+ please. This is book 1 in a series and contains a cliffhanger.

I really don’t know how to feel about this book. It was kind of a disappointment. I had a lot of problems with the plot and the characters.

My first problem with this book was the instalove. Ben sees Ari and already knows she’s different. Why?? We’re talking about a 22 year-old guy who is a known player that doesn’t do relationships but as soon as he see Ari he knows she’s the one. I’m sorry, I could understand if he looked at her and thought that she was beautiful and he wanted to meet her but no, it’s worse. The same happens with Ari but her insecurities make her think she doesn’t have a chance with him.

Now let’s go to problem two with this book. This book has a lot of sex, a lot. Don’t even making me talk about the three/four chapters that were all about sex a couple of days after they met. I love new adult and I don’t have any problem with sex scenes but I thing I didn’t need to read that many chapters about a 24 hour sexapalloza (Ari’s words, not mine). I still don’t understand the need of that chapters, it’s only about them having sex, eating and thinking how right that felt.

My bigger problem with this was Ari. Through out the book we know that something happened to Ari while she was a child. You would think that would make her have to deal with some things and that she might have a few intimacy issues. But I still don’t understand what’s the deal with her because if she had that kind of issues she wouldn’t have spent one weekend having sex with a guy she doesn’t know and that she knows as a player. It doesn’t make sense. For me they’re relationship didn’t make sense at all. It’s not even the sex thing it’s also they’re interactions and how jealous Ben could be sometimes. If you’ve slept with tons a girls before please don’t get all jealous when she’s talking with her ex and don’t ask her how many guys she slept with before you, okay? Also, don’t answer “You’re the only one that matters” when she asks you the same. Really, these two could really frustrate me sometimes.

Now let’s talk about how lame the main conflict in this book was. Another thing I still can’t understand is why the main conflict was Maria (Ben’s ex-booty call). First of all, Ben always said that the only thing he wanted from her was sex and nothing more and she agreed with that so when I get a few paragraphs in Maria’s POV (something that was completely unnecessary) I think I don’t need to read the two were meant to be two times in less that 30 seconds. And everything she did to break up Ben and Ari were the lamest and most predictable things ever. WHY?? It would have been so much better if the main conflict in this book was what happened to Ari when she was a kid because that’ll be a big part of book 2. Talking about book 2, I really liked the last chapter in this book that was in another character’s POV and that left this book in a huge cliffhanger. That chapter was creepy and twisted but it’s also the only reason why I might read book 2, eventually. It would have been so much better if the book this was only one book and not two because I feel this book was too dragged out. The conflicts were not that good and the way it was written also dragged out this book a lot. I love dual POVs but I don’t need Ben’s POV in which he says he can see Ari going to the bathroom line and how he can see her there to read Ari telling she’s on the way to the bathroom line right after. Once again, it was something unnecessary in this book.

I did like a few things in this book. I loved how twisted it was in the end and I loved Ari’s family and Ben’s grandma. Those were my highlights in this book. Also, sometimes the book was actually funny.

Overall, this book was a huge disappointment to me. I was expecting way more from it, especially after seeing that it has so many great review in Goodreads, but in the end it was kind of boring and frustrating. I’m not going to tell you that you shouldn’t read this book because a lot of people loved it but this one wasn’t for me.