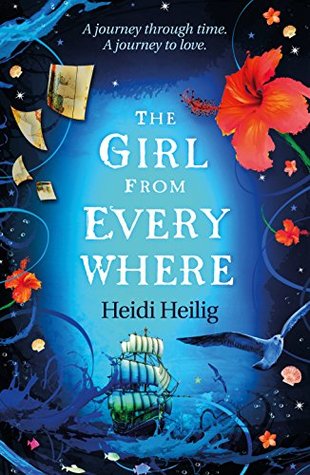 It was the kind of August day that hinted at monsoons, and the year was 1774, though not for very much longer.

Sixteen-year-old Nix Song is a time-traveller. She, her father and their crew of time refugees travel the world aboard The Temptation, a glorious pirate ship stuffed with treasures both typical and mythical. Old maps allow Nix and her father to navigate not just to distant lands, but distant times – although a map will only take you somewhere once. And Nix’s father is only interested in one time, and one place: Honolulu 1868. A time before Nix was born, and her mother was alive. Something that puts Nix’s existence rather dangerously in question . . .

Nix has grown used to her father’s obsession, but only because she’s convinced it can’t work. But then a map falls into her father’s lap that changes everything. And when Nix refuses to help, her father threatens to maroon Kashmir, her only friend (and perhaps, only love) in a time where Nix will never be able to find him. And if Nix has learned one thing, it’s that losing the person you love is a torment that no one can withstand. Nix must work out what she wants, who she is, and where she really belongs before time runs out on her forever.

By now this shouldn’t come as a surprise but once again I read this book as a buddy read with Cristina @ My Tiny Obsessions so click HERE if you want to read her review :).

If you look at the time it took me to read this book it might look like I didn’t like it but the time it took me doesn’t affect what I thought about this book at all. I really liked it. If I took that long was because I’ve not been in the mood for fantasy and that’s the only reason this happened. As soon as I got to 50% I couldn’t stop reading this.

I really enjoyed the story itself and how different it was from the books I’ve read before. I never read a time travel book but the way time traveling worked in this book was amazingly done. Heidi Heilig did a great job writing this book. Not only the story was amazing but so were the characters and I loved that. Nix is one of the best female characters out there. She smart, she’s strong but she’s also insecure about a few things. Kash was one of the best characters ever. I loved him since the first time I saw him. He might be a thief but I love him and I will be mad if something happens to him in the remaining books. I might had a few problem with Slate, Nix’s father, in the beginning but by the end he came around and I learned to like him. As you can see I really liked the characters from this book and I loved how diverse the characters were. Another thing I loved was the history part and the mythology. It was so well written and it’s impossible not to love it.

Overall, this was an amazing read and an amazing debut novel for Heidi Heilig. I can’t wait to read the remaining books of this series. If you love fantasy and time travel you need to read this book because it’s amazing and a great read.