Hi guys! It’s time for a few more book recommendations. I haven’t done a recommendations post for so long that I think it was about time. Today I decided to recommend you a few of my Sci-Fi books. I don’t read a lot of sci-fi books but I thought I should recommend my favorites anyway because these are such amazing books,  So let’s ssee which books made to this list 🙂 .

The Lunar Chronicles by Marissa Meyer

Humans and androids crowd the raucous streets of New Beijing. A deadly plague ravages the population. From space, a ruthless lunar people watch, waiting to make their move. No one knows that Earth’s fate hinges on one girl.

Cinder, a gifted mechanic, is a cyborg. She’s a second-class citizen with a mysterious past, reviled by her stepmother and blamed for her stepsister’s illness. But when her life becomes intertwined with the handsome Prince Kai’s, she suddenly finds herself at the center of an intergalactic struggle, and a forbidden attraction. Caught between duty and freedom, loyalty and betrayal, she must uncover secrets about her past in order to protect her world’s future.

As you might know I love this series and this is one of my favorite series ever. I know that by now almost everyone has read these books but I had to include it anyway. If you haven’t started this series yet you should do it because these books are amazing and it keeps getting better by each book.

This morning, Kady thought breaking up with Ezra was the hardest thing she’d have to do.

This afternoon, her planet was invaded.

The year is 2575, and two rival megacorporations are at war over a planet that’s little more than an ice-covered speck at the edge of the universe. Too bad nobody thought to warn the people living on it. With enemy fire raining down on them, Kady and Ezra—who are barely even talking to each other—are forced to fight their way onto an evacuating fleet, with an enemy warship in hot pursuit.

But their problems are just getting started. A deadly plague has broken out and is mutating, with terrifying results; the fleet’s AI, which should be protecting them, may actually be their enemy; and nobody in charge will say what’s really going on. As Kady hacks into a tangled web of data to find the truth, it’s clear only one person can help her bring it all to light: the ex-boyfriend she swore she’d never speak to again.

Told through a fascinating dossier of hacked documents—including emails, schematics, military files, IMs, medical reports, interviews, and more—Illuminae is the first book in a heart-stopping, high-octane trilogy about lives interrupted, the price of truth, and the courage of everyday heroes.

This book. I can’t even explain how much I loved this book. I was so scared about this book because all the hype around it but it was so good. The story was a rollercoaster of emotions and don’t even make me talk about the experience that is reading this book. It’s unbelievable and so good. Can I have Gemina now??

These Broken Stars by Amie Kaufman and Meagan Spooner

Luxury spaceliner Icarus suddenly plummets from hyperspace into the nearest planet. Lilac LaRoux and Tarver Merendsen survive – alone. Lilac is the daughter of the richest man in the universe. Tarver comes from nothing, a cynical war hero. Both journey across the eerie deserted terrain for help. Everything changes when they uncover the truth.

I’m going to be honest here, I only read this book because the cover is one of the most gorgeous covers I ever saw. Just look at it. However, in the end I really enjoyed this book. It was pretty good. Yeah, there are a few things that I still can’t understand but who cares?? Also, it has romance and everyone knows how much I love romance. I really need to read Their Fractured Light soon so I can finally finish the series.

A Thousand Pieces of You by Claudia Gray 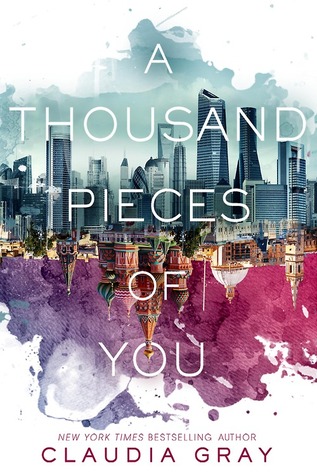 Cloud Atlas meets Orphan Black in this epic dimension-bending trilogy by New York Times bestselling author Claudia Gray about a girl who must chase her father’s killer through multiple dimensions.

Marguerite Caine’s physicist parents are known for their groundbreaking achievements. Their most astonishing invention, called the Firebird, allows users to jump into multiple universes—and promises to revolutionize science forever. But then Marguerite’s father is murdered, and the killer—her parent’s handsome, enigmatic assistant Paul— escapes into another dimension before the law can touch him.

Marguerite refuses to let the man who destroyed her family go free. So she races after Paul through different universes, always leaping into another version of herself. But she also meets alternate versions of the people she knows—including Paul, whose life entangles with hers in increasingly familiar ways. Before long she begins to question Paul’s guilt—as well as her own heart. And soon she discovers the truth behind her father’s death is far more sinister than she expected.

A Thousand Pieces of You explores an amazingly intricate multi-universe where fate is unavoidable, the truth elusive, and love the greatest mystery of all.

This is another one I read mostly because of that gorgeous cover. Seriously, look at it. GORGEOUS. I had no idea what this one was about but this book was pleasant surprise and I really liked it. I really liked that the characters would travel to different dimensions and we could see how different some of them were. Can’t wait to finally read Ten Thousand Skies Above You next month.

Darrow is a Red, a member of the lowest caste in the color-coded society of the future. Like his fellow Reds, he works all day, believing that he and his people are making the surface of Mars livable for future generations.

Yet he spends his life willingly, knowing that his blood and sweat will one day result in a better world for his children.

But Darrow and his kind have been betrayed. Soon he discovers that humanity already reached the surface generations ago. Vast cities and sprawling parks spread across the planet. Darrow—and Reds like him—are nothing more than slaves to a decadent ruling class.

Inspired by a longing for justice, and driven by the memory of lost love, Darrow sacrifices everything to infiltrate the legendary Institute, a proving ground for the dominant Gold caste, where the next generation of humanity’s overlords struggle for power. He will be forced to compete for his life and the very future of civilization against the best and most brutal of Society’s ruling class. There, he will stop at nothing to bring down his enemies… even if it means he has to become one of them to do so.

Okay, I only read the first book from the Red Rising Trilogy but it was so good. This book is completely different from anything I’ve read before and caused me a lot of trust issues but I loved it anyway. However, if you read this book please don’t give up in the first 100 pages. The book starts a little bit slowly but once you are into it you’re really into it. I really need to read the other books especially because Kat @ Life and Other Disasters keeps saying me how amazing they are and that I should read them soon.

So these are a few more books that I want to recommend. Have you read any of these books or would you read any? Tell me in the comments 🙂 . Also, if you have any sci-fi books to recommend go on and comment.