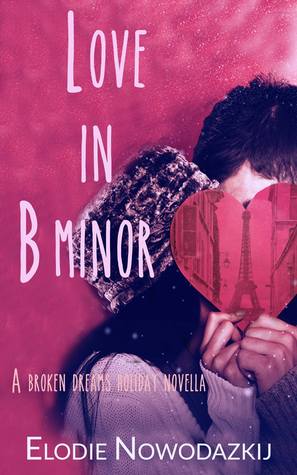 No promises. No fake tomorrows. That was the plan.

New city. New life. At least, that’s what nineteen-year-old Jen Harrison believes. On the surface, she’s living her dream: dancing in a prestigious dance company in Paris. But her sister’s death and the mistakes she’s tried to bury haunt her. She’s become a pro at hiding who she truly is, and she definitely doesn’t want a guy to derail her, but a one night-stand she can do. Nothing more. She definitely doesn’t plan to see the sexy stranger who made her laugh for the first time in years ever again.

Girls don’t walk away from Lucas Wills. Bad boy turned rock star, he’s got his share of groupies. Always upfront, he doesn’t promise fake tomorrows because love can destroy everything. Been there, done that. His ex not only lied to him, she stomped on his heart, used him to become famous, and almost ruined him. So, waking up alone after a night beyond his wildest imagination with a girl he just met shouldn’t upset him, shouldn’t inspire one of the saddest songs he’s ever written, shouldn’t make him want to chase after her.

When Jen, the one-night stand who got away, auditions to be a dancer in Lucas’ next music video, they can’t stop their growing attraction. But Jen’s secrets and his ex could shatter the careers they tried so hard to build and their hearts…they will have to decide what’s more important and if love is worth the fight.

Once again I read this book as a buddy read with Cristina @ My Tiny Obsessions so go check her review in her blog to see her thoughts :).

You have no idea how excited I was about this book. I loved the previous books and novellas from the Broken Dreams series and because I already knew Jen I couldn’t wait to finally read a story about her. When I first read A Summer Like no Other I really didn’t like Jen because she was a mean girl and a unlikeable character but in Always Second Best it was possible to see why she acted that way so I wanted to know more about her. Once again I really enjoyed the story and the characters created by the author. Jen had so much more in her story than what was known. Lucas was also a great character. I really liked him and I loved to see these two together. Jen and Lucas almost dethroned Em and Nick as my favorite couple from this series, and that’s huge because I love Em and Nick, but in the end the instalove aspect of their relationship got in my head. Still, they were extremely cute. I also really liked the side characters and I wouldn’t mind if we had something (like a book or a novella) about Steve and Alisha. That would be great. I wasn’t expecting the turn of events that happened by the end of this book. It was a nice surprise and I couldn’t have guessed that something like that would happen not even in a thousand years. There were a few things that could have done better but in the end I really enjoyed this book. My only problem with this book was a little timeline inconsistencies in one certain event that happened in the story but that’s the only thing that I didn’t like that much.

Also, let me just fangirl for a little bit because Elodie Nowodazkij talked about Villain Complex, a fictional band from Elizabeth Briggs Chasing the Dream series which, by the way, it’s one of my favorite NA series out there. Well done, Elodie. I loved this nice touch 😀 .

Overall, this was a great addition to the Broken Dreams series. I really enjoyed the story and it’s possible to see how much the author has improved through these books. I would definitely recommend you this book and the remain books from the series.