Hi guys! It’s time for a few more book recommendations. Today I decided to recommend you a few of my Favorite LGBTQ books. I haven’t read a lot of LGBTQ but I loved most of the books that I’ve read that dealt with this and I really wanted to have a reason to talk about them so here it is.  So let’s see which books made to this list 🙂 .

Carry On by Rainbow Rowell

Simon Snow is the worst chosen one who’s ever been chosen.

That’s what his roommate, Baz, says. And Baz might be evil and a vampire and a complete git, but he’s probably right.

Half the time, Simon can’t even make his wand work, and the other half, he sets something on fire. His mentor’s avoiding him, his girlfriend broke up with him, and there’s a magic-eating monster running around wearing Simon’s face. Baz would be having a field day with all this, if he were here—it’s their last year at the Watford School of Magicks, and Simon’s infuriating nemesis didn’t even bother to show up.

Carry On is a ghost story, a love story, a mystery and a melodrama. It has just as much kissing and talking as you’d expect from a Rainbow Rowell story—but far, far more monsters.

Okay, the relationship is not the focus of this book but I still had to talk about it because it has one of the cutest LGBTQ couples ever. Also, it’s a pretty amazing book and everyone should give it a try. You can see my review here.

Simon vs. the Homo Sapiens Agenda by Becky Albertalli

Sixteen-year-old and not-so-openly gay Simon Spier prefers to save his drama for the school musical. But when an email falls into the wrong hands, his secret is at risk of being thrust into the spotlight. Now Simon is actually being blackmailed: if he doesn’t play wingman for class clown Martin, his sexual identity will become everyone’s business. Worse, the privacy of Blue, the pen name of the boy he’s been emailing, will be compromised.

With some messy dynamics emerging in his once tight-knit group of friends, and his email correspondence with Blue growing more flirtatious every day, Simon’s junior year has suddenly gotten all kinds of complicated. Now, change-averse Simon has to find a way to step out of his comfort zone before he’s pushed out—without alienating his friends, compromising himself, or fumbling a shot at happiness with the most confusing, adorable guy he’s never met.

This book is one of the cutest things ever and Simon and Blue’s relationship is great. If you’re in need of a cute and fast read with a LGBTQ couple you should definitely give this one a try. It’s so good. You can see my review here.

I’ll Give You the Sun by Jandy Nelson 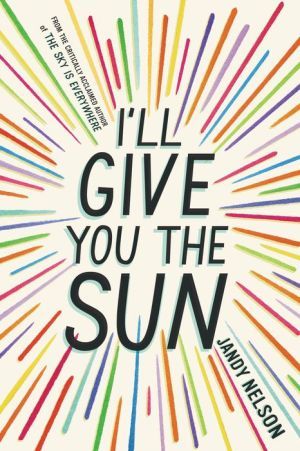 Jude and her twin brother, Noah, are incredibly close. At thirteen, isolated Noah draws constantly and is falling in love with the charismatic boy next door, while daredevil Jude cliff-dives and wears red-red lipstick and does the talking for both of them. But three years later, Jude and Noah are barely speaking. Something has happened to wreck the twins in different and dramatic ways . . . until Jude meets a cocky, broken, beautiful boy, as well as someone else—an even more unpredictable new force in her life. The early years are Noah’s story to tell. The later years are Jude’s. What the twins don’t realize is that they each have only half the story, and if they could just find their way back to one another, they’d have a chance to remake their world.

This book is amazing. It deals mostly with the relationship between Noah and his twin sister Jude and what happened to them and why their relationship is so broken but it also as a LGBTQ couple that I don’t if I can’t say between who. Also, Jandy Nelson has an amazing writing style and was able to write this beautiful books. If you want to you can read my review by clicking here.

Every Day (Every Day #1) by David Levithan

It’s all fine until the morning that A wakes up in the body of Justin and meets Justin’s girlfriend, Rhiannon. From that moment, the rules by which A has been living no longer apply. Because finally A has found someone he wants to be with—day in, day out, day after day.

I’m pretty sure everyone heard about this book mostly because of how different it is. I really enjoyed it and how it deals with identity and things like that. Because A as a different body every day he/she can’t be identified as a boy or a girl and that puts everything in perspective when he/she meets Rhiannon. This is an amazing book that everyone should read.

Paloma High School is ordinary by anyone’s standards. It’s got the same cliques, the same prejudices, the same suspect cafeteria food. And like every high school, every student has something to hide—whether it’s Kat, the thespian who conceals her trust issues onstage; or Valentine, the neurotic genius who’s planted the seed of a school scandal.

When that scandal bubbles over, and rumors of a teacher-student affair surface, everyone starts hunting for someone to blame. For the unlikely allies at the heart of it all, the collision of their seven ordinary-seeming lives results in extraordinary change.

This is the most recent one I’ve read from all the books I’m talking about today. Because it has 7 POV’s all the characters have some sort of thing going on and one of the characters identifies as something that’s not straight or gay. You have to read to understand what I’m talking about because I don’t want to say too much but it’s a different take on these LGBTQ issues that normally it’s not talked about. If you want too you can read my review here.

So these are a few more books that I want to recommend. Have you read any of these books or would you read any? Which LGBTQ books should I read? If you have any recommendations tell me in the comments 🙂 .