Hi guys! It’s time for a few more book recommendations. As I told you in my last recommendations post (here) I decided to split my original post in 3 different posts because I had a lot of books that I wanted to recommend so today we have Young Adult Contemporary Novels – Part II. So let’s start these recommendations.

Anna and the French Kiss by Stephanie Perkins

Can Anna find love in the City of Light?

Anna is happy in Atlanta. She has a loyal best friend and a crush on her coworker at the movie theater, who is just starting to return her affection. So she’s less than thrilled when her father decides to send her to a boarding school in Paris for her senior year.

But despite not speaking a word of French, Anna meets some cool new people, including the handsome Étienne St. Clair, who quickly becomes her best friend. Unfortunately, he’s taken —and Anna might be, too. Will a year of romantic near misses end with the French kiss she’s waiting for?

If you want a cute a fluffy contemporary novel you should definitely try to read Anna and the French Kiss and also the whole series. This book is great and full of romance. The best part of it, it has Étienne St. Clair and he’s (almost) perfect.

To All the Boys I’ve Loved Before by Jenny Han

To All the Boys I’ve Loved Before is the story of Lara Jean, who has never openly admitted her crushes, but instead wrote each boy a letter about how she felt, sealed it, and hid it in a box under her bed. But one day Lara Jean discovers that somehow her secret box of letters has been mailed, causing all her crushes from her past to confront her about the letters: her first kiss, the boy from summer camp, even her sister’s ex-boyfriend, Josh. As she learns to deal with her past loves face to face, Lara Jean discovers that something good may come out of these letters after all.

Another one that is cute and fluffy. It’s almost impossible not to love To All the Boys I’ve Loved Before. I didn’t like the sequel that much but I still love the series. My only question is: where can I get a sister like Kitty?

My Heart and Other Black Holes by Jasmine Warga

Sixteen-year-old physics nerd Aysel is obsessed with plotting her own death. With a mother who can barely look at her without wincing, classmates who whisper behind her back, and a father whose violent crime rocked her small town, Aysel is ready to turn her potential energy into nothingness.

There’s only one problem: she’s not sure she has the courage to do it alone. But once she discovers a website with a section called Suicide Partners, Aysel’s convinced she’s found her solution: a teen boy with the username FrozenRobot (aka Roman) who’s haunted by a family tragedy is looking for a partner.

Even though Aysel and Roman have nothing in common, they slowly start to fill in each other’s broken lives. But as their suicide pact becomes more concrete, Aysel begins to question whether she really wants to go through with it. Ultimately, she must choose between wanting to die or trying to convince Roman to live so they can discover the potential of their energy together. Except that Roman may not be so easy to convince.

By now you’re probably tired of seeing me talk about this book but I loved it and I just think that everyone should read it. This book is way darker than the last two books I talked because it deals with depression and suicide but is a beautiful book that really makes you think about life.

The Last Song by Nicholas Sparks 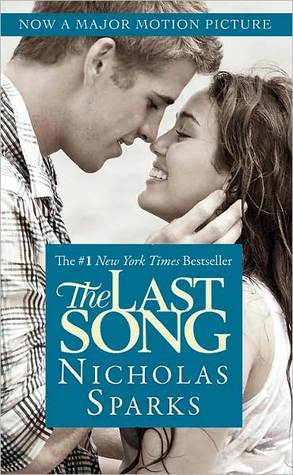 Seventeen year-old Veronica “Ronnie” Miller’s life was turned upside-down when her parents divorced and her father moved from New York City to Wilmington, North Carolina. Three years later, she remains angry and alienated from her parents, especially her father… until her mother decides it would be in everyone’s best interest if she spent the summer in Wilmington with him.

Ronnie’s father, a former concert pianist and teacher, is living a quiet life in the beach town, immersed in creating a work of art that will become the centerpiece of a local church. The tale that unfolds is an unforgettable story about love in its myriad forms – first love, the love between parents and children – that demonstrates, as only a Nicholas Sparks novel can, the many ways that deeply felt relationships can break our hearts… and heal them.

I know that a lot of people don’t like Nicholas Sparks. I don’t care. I love his books and I’ve read all of his books (with the exception of the last one). If you’ve read any of his books you know that you’ll probably cry in this one and it’s true. I cried like a baby and I love the story.

A coming-of-age tale of fan fiction, family and first love.

Cath is a Simon Snow fan.

Okay, the whole world is a Simon Snow fan…

But for Cath, being a fan is her life—and she’s really good at it. She and her twin sister, Wren, ensconced themselves in the Simon Snow series when they were just kids; it’s what got them through their mother leaving.

Reading. Rereading. Hanging out in Simon Snow forums, writing Simon Snow fan fiction, dressing up like the characters for every movie premiere.

Cath’s sister has mostly grown away from fandom, but Cath can’t let go. She doesn’t want to.

Now that they’re going to college, Wren has told Cath she doesn’t want to be roommates. Cath is on her own, completely outside of her comfort zone. She’s got a surly roommate with a charming, always-around boyfriend, a fiction-writing professor who thinks fan fiction is the end of the civilized world, a handsome classmate who only wants to talk about words… And she can’t stop worrying about her dad, who’s loving and fragile and has never really been alone.

For Cath, the question is: Can she do this?

Can she make it without Wren holding her hand? Is she ready to start living her own life? Writing her own stories?

And does she even want to move on if it means leaving Simon Snow behind?

To be honest I’m pretty sure that everyone that has read Fangirl recommends this book. I loved this book and how it wasn’t all about romance. It’s also about Cath’s relationship with her family and how difficult it is to be on your own when you’re so used to have someone who helps you in everything. Also, Rainbow Rowell writing style is just amazing.